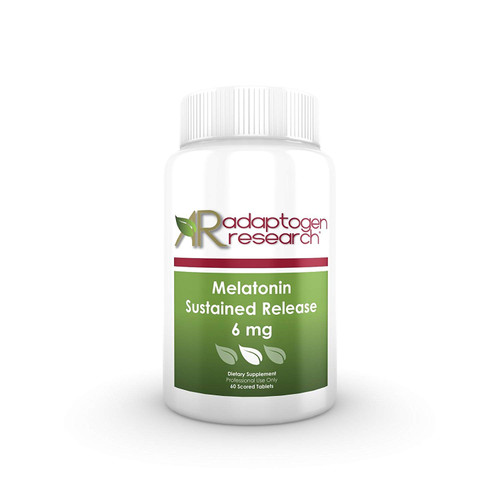 Melatonin is useful for regulating sleep and the body's daily rhythmic cycle, making it ideal for jet lag.

Melatonin Sustained Release provides 6 mg melatonin in a sustained release tablet. The hormone melatonin is secreted by the pineal gland. As a supplement, it is useful for regulating sleep and the body's daily rhythmic cycle, making it ideal for jet lag. Melatonin is also an important antioxidant which acts as an effective scavenger of free radicals. Various factors may cause melatonin levels to become low, such as inadequate dietary intake of its precursors (tryptophan and serotonin), normal aging, insufficient exposure to natural light, and certain medications. Melatonin may support a healthy immune and stress response.

Melatonin is a hormone produced by the pineal gland which serves to synchronize and coordinate biological functions of the body. This hormone appears in foods in only trace amounts and, therefore, supplementation supports the natural functioning of the pineal gland. Melatonin is important in regulating sleep, circadian rhythm and the body's natural time clock. Melatonin is also an important antioxidant, rapidly taken up by the brain, which acts as an effective scavenger of highly toxic free radicals that induce DNA damage. The amount of melatonin produced by our bodies seems to decrease with age.

Due to melatonin's relatively short half-life in the body, a sustained release formula may be more suitable for those who experience difficulty staying asleep through the night.

Adults: 1 tablet / Vegetarian Capsules daily as needed or as directed by a healthcare professional. Best taken in the evening

Made with NON-GMO ingredients.